What Remains: Cebu after the Storm

Acres of sand greeted me on the morning I woke in Cebu.

Arriving on the midnight flight from Hong Kong, my Filipina host and her German husband had collected me from the airport.

For three hours our trinity drove north into darkened jungle. But for the occasional village-party exploding wild by the roadside, the tableaus before dawn were dimly-lit.

When I woke I went to the ocean.

It was the reason for being there. I wanted to escape the clamping dread of the metropolis. To write. To swim. To sleep in silence.

When, over email, the German husband had apologized for a lack of Wi-Fi, I had replied in fatigued relief.

And so it was that I found myself on the northern tip of Cebu, contemplating the realms of ocean-floor unearthed before me.

Tender with solitude, I ventured out.

Before long I realized that what was underfoot was neither sand nor sea. It was sky. Night-sky to be exact. A carpet of stars stretched to where the water soldered silver to the horizon. 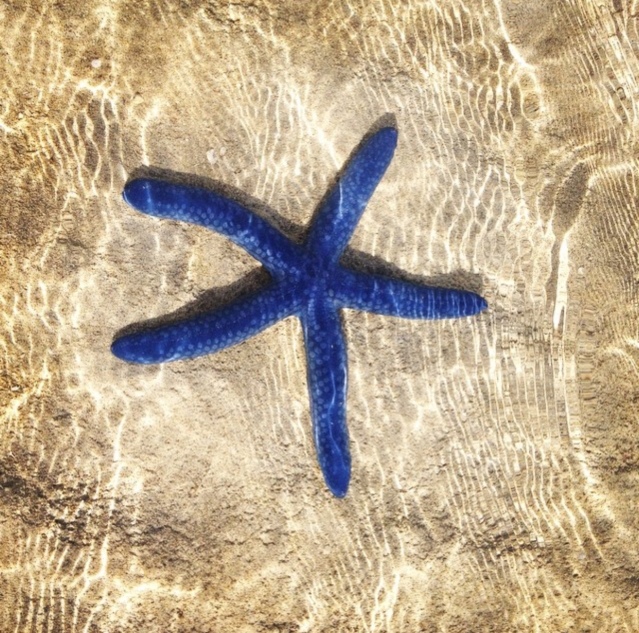 The starfish sprawled in their thousands. They ranged from neon-blue nebulas to bursts of glimmering yellow. They were both earthly and removed, in places leaving only haunting imprints like a pattern on pressed tin.

Everywhere they sucked and spurted, suffocating out of water. I wondered what had brought them to ground so violently.

Why had heaven ejected its contents?

That evening I made my way to the dining room. The only other guest met me there. A New Zealand woman teaching English on the Chinese mainland, she had withdrawn from the chaos as I had.

Alone, we selected cold beer from the fridge and tallied our beverages on a notepad operating as the bar’s honor system.

As the evening turned black and the beer dwindled, gas-lamps materialized on the water. The small lights bobbed with the waves, haunting the ocean with silhouettes of nocturnal fishermen.

At our back the jungle encroached. No longer lit by sunshine, it had shape-shifted into something solid and ominous.

By the time our host and her husband joined us I was keen to chat. We shared a seafood dinner and more beer. It wasn’t long until talk turned to their relationship. Before this point I had imagined a spectacular romance.

It’s odd now to think how unprepared I was.

Our host, eyes glistening with self-determination, recounted her memories. She swallowed old pain and detailed a previous marriage of unimaginable violence.

So traumatic was the abuse that her ex-husband would chain her legs at night to prevent escape. The woman who had built the room we sat drinking cold beer in, had survived unthinkable horrors.

After a secret rendezvous with the German, a kind and loving man, they had become pregnant with a baby boy. Together they had facilitated her escape.

As they detailed building their new home, music could be heard coming from the jungle. At first indistinct, it soon became clear that our neighbors were celebrating. The volume steadily increased. Then came crashing. Screams.

The night bruised dark with peril.

In the morning, our host had marched next door. Our neighbors were obscured by trees. I could not see where they were or where my new friend had disappeared to.

When she returned her face was flushed. ‘What right did she have to tell them what to do?’ they had said. ‘Why didn’t she marry a local man?’ they had asked. They would kill her if she came again.

Setting her shoulders in the type of squared strength that life had required of her, she shrugged it off. Instead of bothering with these things would we like to visit her son’s school? We could see what was left of the classrooms after the storm. The New Zealander and I nodded.

The storm our host was referring to was the most recent calamity to befall paradise. It had been devastating. It had thrashed, lifted roofs, plundered.

But even though it had wrought havoc it wasn’t what most people on Cebu were referring to when they mentioned the ‘storm’.

That singular horror had arrived three years earlier in the guise of Typhoon Haiyan, the strongest tropical cyclone in recorded history. So complete was the annihilation that two months after landfall they were still finding bodies.

Perhaps, I thought, that was the night the stars fell.

As it turned out, what remained of the school wasn’t much. Books lay pulped in mounds under trees. Classrooms stood roofless. Desks sat dark and water-logged.

The lessons had moved outside. They were being conducted under donated tarpaulins, mired in mud and hot with midday steam. The children did not disguise their loss. They were flighty, hurt, reaching for hope.

In their ranks sat our host’s son, his green eyes an anomaly. Sensing a possibility to escape, he begged to leave early and we departed with him to our home by the sea.

Within a day or so the New Zealander and I formed a routine. We would meet at dawn and walk along the beach.

In the white light of early morning the jungle spat people onto the sand. They rushed for the bounty delivered with the evening tide, gathering seafood snacks and resisting the day.

Try as I might I couldn’t avoid stepping on the starfish. There were too many. Sometimes, in my haste to avoid one, I would simply land on top of another. There were so many that every morning it seemed entire galaxies had fallen in the night.

The only sand free of stars held their ghosts, but I couldn’t immediately tell the difference. The stencils that remained flickered deceptively, just as a star pulses bright for an eon after destruction.

But the truth was that they were already lost… dead all along. 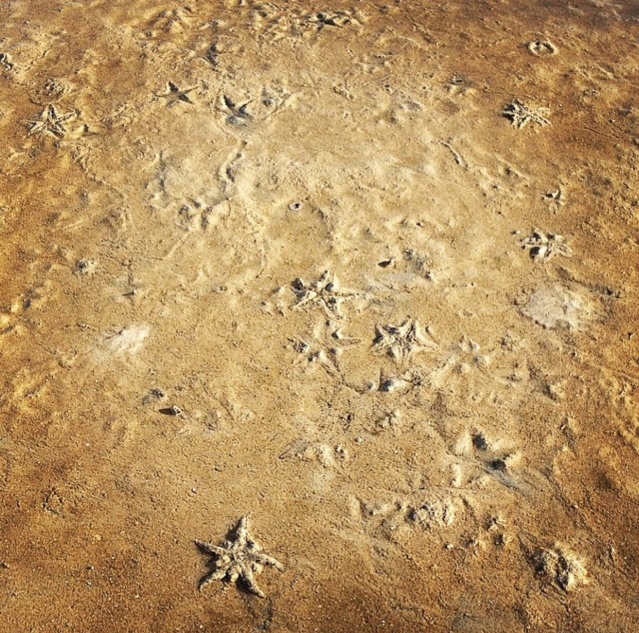 Before lunch, when the water returned, the green-eyed son would join us in the ocean. He would flip and squeal, slurping urchins and spinning bright in the sunshine.

Our hosts would call to us from shore. What would we like for lunch? We would holler our requests and the New Zealander, the boy and I would play again until the call to the dinner-table made children of us all.

We ate and drank. We swam and slept. The days came and went and the contents of the beer-fridge rose and fell with the ocean.

On Cebu, where all is jungle and sea, the rhythms of the day are not dictated by the coming and going of the sun. They are instead book-ended by the movements of the moon. On the final morning I was lured by this lunar magnetism, just as the ocean was… pulled to the horizon with the night.

The starfish spluttered in the peach of dawn. Their skin celestial. Their breath cosmic. They would struggle under the sun until the water returned. Their lives destroyed and rebuilt ad infinitum.

On the sand I bade farewell to Cebu.

I was sad to leave. Extracting my memories felt like perpetrating another type of trauma. Was taking them with me an additional theft?

However, as the sun rose and the tide returned, I knew the true strength of Cebu lies not in what is lost but in what remains.

← Where the Bookish Bed Down: Accommodation for Bibliophiles
The Heart is a Library Hunter →