This is How it Ends: A Near-Death Experience in Phuket

This is how it ends.

That was my first thought when, surrounded by couples at a honeymoon resort in Phuket, a fish bone lodged in my throat.

Choking, I scanned the beach-side restaurant, my only access to first-aid, an overpriced mojito.

I turned wide-eyed to the couple sitting next to me. The woman was preening in the fire-side filter of her iPhone, puckering her lips and tilting her head at the screen like a puppy.

I clutched at my throat. This wasn’t death-by-selfie which is totally a thing now, but death-near-selfie which is considerably more pedestrian and that’s really saying something.

The day had started well enough. I’d been first at the pool, my only other company a Thai man painting a ceramic turtle pink in the ornamental garden.

I’d moved to a hammock on the beach, again in solitude, until an attractive couple ventured out in thermal lounge-wear. Must have lost their luggage, I thought, as they launched an appropriately named drone, inadvertently attracting the interest of a pack of local strays and ruining the quiet so completely that even my harrumph was inaudible. 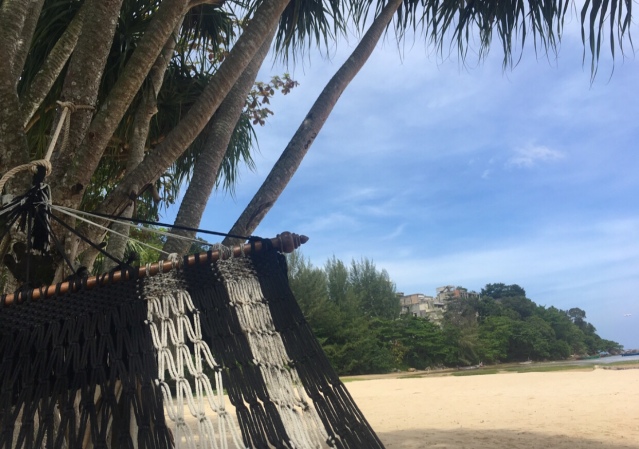 By mid-afternoon, hunger had drawn me from the water. I’d traced the shore, scanning for an establishment that looked empty.

When I found a joint, the only client a geriatric dog burrowed into the sand and gnawing on discarded pad thai, I knew that it was the place for me.

I introduced myself to the proprietor, an upbeat woman, her arms covered in cut-off stockings to protect her from the same sun that threatened her dog’s nap. I ordered, threw back by head and hoped to heaven that this would be a quiet afternoon.

“You want to see my flower?”

The request had come from over my shoulder and I had jumped, remembering that I wasn’t alone.

At first, I wasn’t sure if the entreaty was a Thai euphemism for a bonus item from the menu, but then she pointed to an actual flower growing several meters away.

I turned to the red hibiscus.

“Next time I won’t come up from behind.”

She winked and I laughed, the Chang beer finding its way to my fingers.

For a short time it remained the four of us; the Thai woman, the old dog, the sand-flower and I.

With the first bite of barbecued prawn I looked up to see an Indian man walk past. He wore dress pants and sandals. No hat. No bag. Nothing else. Drenched, he pressed on at a clipped pace. He was a man on a mission.

“Been doing that all morning.” My new Thai friend raised her eyebrows.

Back and forth he went, high up on the dry sand in the white-heat of the afternoon. After his third trip past it felt rude not to say hello.

“Nice afternoon for it.”

“So why, may I ask, are you walking back and forth along the beach in the heat of the day?”

“Because I need answers. I only get them if I walk.”

The man continued his afternoon constitution, but now it was awkward. Obliged to acknowledge each other, we nodded another two or three times, the frequency decreasing like a bouncing tennis ball coming to rest.

After a plate of fried banana, I realised it had been a while since I’d last seen him. Finally alone, I looked up to see a woman walking purposefully toward the table next to me.

What is it, I pondered, that makes a person choose the table directly next to the only other patron in an empty restaurant?

In what seemed like an Eastern-European accent, she brusquely ordered a smoothie with no sugar, no dairy and no ice. My Thai friend raised her eyebrows again. Who doesn’t want sugar in their holiday beverage, the eyebrows seemed to say.

The woman was beautifully dressed. She had on a black bikini and matching lace cover-up. Manicured and bejeweled she was completely polished except for one glaring oddity… she was wearing hotel slippers.

Strange, but at least she was quiet. That was, of course, until her equally manicured and hotel-slippered male companion joined her. They were, it seemed, in the middle of a fight.

They spat at each other through gritted teeth, sipping at bland beverages and occasionally slamming the plastic table. The dog, as ancient as he was sleepy, moved to the shadows near the sand-flower, his disapproval clear for all to see.

At the argument’s climax the woman stood and stormed off, but like someone trying to slam a door that doesn’t close, running from your lover along the beach loses its dramatic impact when done in hotel slippers.

Needless to say, it was time to move on and after a solo siesta, I made way to the hotel restaurant and ordered the fateful fish.

There I came to be, having spent the day wishing for solitude, finally alone and choking on a fish bone.

Where were the drone couple when you needed them? Or the introspective Indian? Surely the bickering Europeans would help me or perhaps the Thai lady and her old dog would come to my rescue?

Alas, no one noticed me choking in the corner.

The irony didn’t escape me as I reached for the mojito, swishing it down my throat and praying for a miracle.

The expensive drink swooshed and gurgled. The bone softened and dislodged, slipping down my esophagus like a deep-sea diver.

Saved, I received the type of epiphany that only choking on barbecued fish in a honeymoon resort in Phuket could bring…

You get what you wish for.

← The Heart is a Library Hunter
A Story About a Story: How a Writer Found Inspiration →